In the context of the recent tragic incident in Genova, the topic of bridge conditions suddenly becomes widely discussed. How can anyone be sure the state of the bridge they drive on is good? The answer might be given by modern technology.

The Need for Data

Generally, the road infrastructure is damaged by the traffic intensity, yet much more by the weight of the separate vehicles. So, there are reasons to monitor how much vehicles use the road and which vehicle classes dominate. These can be done by traffic counters and classifiers. Based on the obtained information, the road stress load can be estimated and local authorities know what the bridge has gone through much better. That helps with maintenance planning and, in the end, cost saving.

It is estimated that one overloaded truck causes as much damage to the roads as almost 30,000 personal cars. In order to achieve more accurate and detailed information about the road damage, it is then appropriate to use a Weigh-In-Motion system.

The graphs are based on collecting data from one of CAMEA WIM installations in Russia. They show how heavy trucks influence a cumulative load. Despite being the least frequent group of vehicles, they cause the most damage in total. It is also obvious the cumulative load decreases when enforcing. The reason is every overloaded vehicle eliminated means significant damage avoided. For instance, a common 5 axle semitrailer vehicle weighing 40 tons reaches 4.15 ESALs. Overloading this vehicle by 20 % means increasing the number more than twice, to 8.53 ESALs. 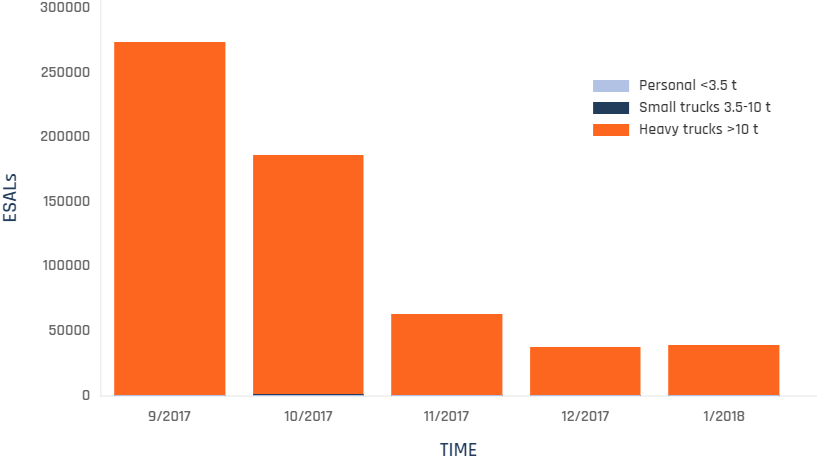 Weigh-in-motion systems protect the roads. Protecting the bridges is particularly important as there is a greater danger involved. Applying weighing in motion at a spot near the bridge entering, not only do the local authorities have the best possible information about the stress the bridge has gone through, but the stress can be avoided by diverting overloaded vehicles. Using a pre-selection principle, they can be fined and ordered to unload. Until their weight is acceptable, they can’t continue with the journey, nor with damaging the bridge and other infrastructure more than necessary.

Weigh-in-motion systems provide users with very accurate and complex information about the traffic. To a certain extent, the traffic determines the course of the bridge condition in time. It is possible to protect its state by enforcing the weight limits. That is most commonly done with a pre-selection method, allowing to prevent overloaded trucks from further travelling and enabling the not violating drivers to continue without interrupting their journey.